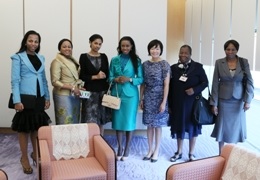 Hmm, which to choose?

The King of Swaziland has decided, after much debiliation, to feature of the UK television show, Wife Swap, where couples swap wives for a period of time. The only trouble, is that the King has 15 of them.

"We may find another polygamous couple to complement this imbalance", says one worker on the show. "We won't deny his request, for sure, but we do want to make sure that it is appropriate for another man."

The King, Mswati III, says that he is happy for all 15 wives to be swapped, for just one.

"You know, it is a bit of a shame, that decided to have all these wives." he said. "Maybe I will just experience having one for some time, see how it goes, yah?"

We asked our resident field reporter, Ivan Kafferov, to gauge public opinion on the streets of Scarborough, Yorkshire, to see if women would pair up with the world's best pussy magnet.

"I wonder if he would take me and then never come back", says one woman.

"To go to Swaziland? I'm not interested, thanks!" says another.

So, it may indeed be, that the King may have problems obtaining a wife in the swap. Hopefully, some well-wished woman will make sure that it is not the case.

Wife Swap organisers state that they will obviously have to find someone who is comfortable with 15 wives.

"We want to make sure that they have comfortable living conditions." say organisers.

"You know, someone who does like polygamy, they may have fun with this."

Wife Swap: King of Swaziland special, will broadcast on the 17th September, at 9pm. Have fun watching it, lads.