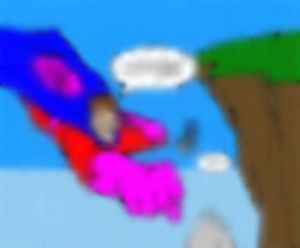 Captain Censor was born on August 20th, 1990. Though Captain Censor is practically in his 20's, A.K.A his youthful years, he looks like a shriveled raisin. Because of this, he wears 30 types of lotion and 20 types of creams. The captain is also known for his constant accusations of child molestation. The Captain's father, Captain Oblivious, is often attributed to Censor's failure as a captain, as Oblivious never took much interest in his son, or his family, or anything in general. During his death in 2010, Captain Oblivious addressed his failure as a father, saying:

~ Captain Oblivious on his son's failure

“My mom raised me forever. Though I will miss her exuberance, I will especially miss her credit card.”

In 2018, PETA called out Captain Censor for censoring a page that, quote-on-quote "exposed the molestation of baby cows by aliens by farmers to make an elite-cow race." Captain Censor was actually supported for the decision by the NAF (National Association of Farmers), saying "Thanks for censoring that article. It could had exposed us for the cow-molesting aliens-befriending bastards we are." The NAF has since deleted this comment.