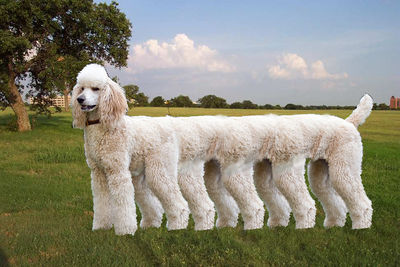 Created as a result of an accidental cross between a wombat and a Cecropia moth, the Caterpoodle has become the most rapidly growing (or at least the most rapidly elongating) breed in the eastern United States. Breed of exactly what is less clear, however.

Though not yet recognized by the American Kennel Club (on the debatable grounds that something which is half wombat and half some sort of bug probably shouldn't be classified as a "dog", whether or not it comes when you call it and steals the frozen steak you left on the table to warm up before you popped it onto the grill if you turn your back on it), the Caterpoodle ... where were we going with this again?

Actually calling it "the caterpoodle" is really not accurate, as there are many more than one. In fact there are entire ranches devoted to them, occupying the buildings which were formerly used by the now-defunct mink industry. Aquatic caterpoodles are also being farmed, though on a rather smaller scale, using facilities formerly devoted to raising river sturgeon.

Caterpoodle eggs are also reported to be considered a delicacy in France, but they eat snails, too, so it's not clear how much of a conclusion we can draw from this.