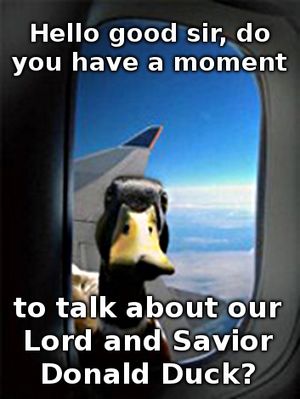 This was supposed to be a picture of a dinosaur but I couldn't find one.

Have you ever noticed how annoying dinosaurs are?

Like, there you are walking through the Byward Market, and a Tyrannosaurus Rex steps out from behind a trash can and shoves a pamphlet into your hands. "Excuse me, sir, but do you have a moment to discuss Our Lord and Savior?" The pamphlet has a picture of the Beast from 20,000 Fathoms on the front.

I mean, really, what are you going to do at that point?

If it was a mouse bothering you, you could just scoop it up and feed it to the nearest cat.

If it was a duck bothering you, you could ... oh, I don't know, throw some peanuts in the pond, and hurry off while the duck was going after them.

If it was a goose bothering you ... actually you're better off with the T. Rex than a goose, come to think of it.

But anyway the point is that you're probably not going to have the nerve to be rude to a T. Rex, and you may even find yourself stammering, "Oh, uh, yes, yes, I suppose I do!" and then there you are, pinned down for the next half hour, and you just know you're going to be late for that lunch date you had as a result, and the three martinis that are waiting for you at the Drunken Skunk bar are going to be so sad and bored -- you just hope they don't wander off before you get there.