From Illogicopedia
(Redirected from Disney)
Jump to navigation Jump to search

This is a genuine photograph of Disney during his middle years

Walt Disney, racist, entrepreneur, melon afficianado, hallucination extraordinaire. Plenty of words describe Walt Disney, including two of those previously mentioned. Can you guess which? I'll give you a hint: it has to do with melons.

Walt Disney was born in the magical land of Arcadia to two giant field mice, later confirmed to be his "parents". Disney, like most other Imagineers that would follow him, was born with the curse/blessing of being in a perpetual state of hallucination. I suppose that would explain his believe that his parents were field mice.

As a result of his convoluted and possibly false memories, most of them regarding species differences and watermelon murder, many conspiracy theories have developed around Disney's past. In fact, some scientists prefer to believe that he didn't have any past at all. Instead, he appeared in the world at the age of 23 after something involving a vortex, immaculate conception, and enough LSD to keep the nation of Burma seeing flying purple hippos for well over a week. 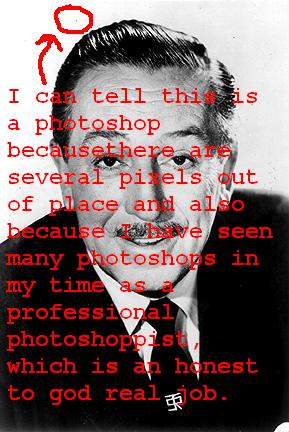 A major philosophy debate started following Disney's death as to whether Disney created Disneyworld, or if Disneyworld had, in fact, created Disney instead. Of course, this is just a philosophical debate similar to the age old question of whether God created Man, a metaphysical belief, or if Man created God, the questioning of a state of mind. Of course, it is completely impossible that Disneyworld, having come into existence on its own, fashioned Disney physically in its own image.