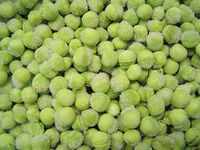 There were few peas who were killed. All the ones who did die were most likely killed by this monster. Notice the green mush on his face.... thats the peas.... poor guys.

Nosy peas in Utah were wondering what down syndrome was. They learned it was peanuts. So they made a program that included eating peanuts that were coated in yellow cranberry juice stuff. No one like the program so they all tried to kill the peas.

An end to peas... not really[edit]

After the down syndromicle affair the peas all were sold in the WalMarts across Lesotho, which is a barren, stupid, pointless, microscopic country in South Africa. Fortunately, the customers in Lesotho had all died of various diseases. Also, there were only [Insert number here] walmarts in Lesotho.

Dead things... in the water.[edit]

Dead things were in the water.