From Illogicopedia
Jump to navigation Jump to search
YOU GONNA GET RAPED!! CLICK HERE TO ESCAPE. 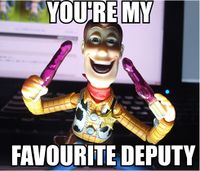 In 2006, Japanese toy company Kaiyodo released their Revoltech line of collector-oriented toys that consisted mainly of Anime figures. In 2010, Kaiyodo broadened their variety of toys with a new subline called the Revoltech SFX (Sci-Fi/Tokusatsu) series. This line focused on iconic characters from Japanese and American film and television series like Mothra, Gamera, the Alien, Jack Skellington and Batman. In March of 2010, Kaiyodo unveiled prototypes for Buzz Lightyear and Sheriff Woody from the Toy Story movies. Like most Revoltech toys, the Woody figures had a alternate faceplates to choose from. Look at all the variety!