HowTo:Become a clock in between scenes

The clock transition is a fundamental part of any television series aimed at people who don't understand changes of scenery, indicating the passing of time and possibly the growth of extra ligaments. Come the second season, however, the writers may begin jumping the shark and collectively decide that they need a larger variety of clocks to keep their viewers entertained. This often leads to abominable creations and terrifying human-clock hybrids. Many actors within the show aspire to become the clock as well, in order to gain extra pay and airtime. Being a stand-in for the clock is also a reasonably paid job, considering that on occasion impersonating a clock correctly requires several takes. 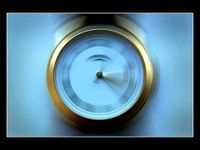 Regular clocks often couldn't handle the pressure and had seizures (as seen above) before deciding to boycott the entertainment business.

Usually the director will signal for you when to start. You will be keeping in time with a metronome of around 60 beats per minute, though the tempo can reach 175 if the clock is particularly inaccurate. Begin to move your head and arms in syncopation to the rhythm. Moving your eyes will add more uncertainty and would certainly be effective for films with a lot of suspense.

What not to do[edit]