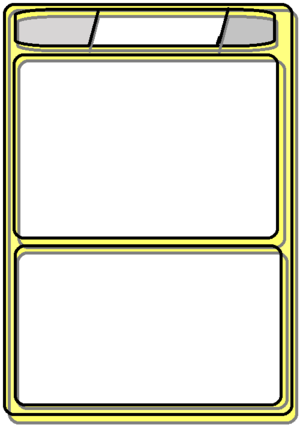 Unlike some boring thing that boring things made and scraped, this is not about editing Illogicopedia. It's more like IllogiRPG style.

You can even Create your own cards!

We need a Beta tester!

The goal here is, unless User Cards or Rule Cards redefines the goal, it's to reach 10000 points, or make the opponent's points to -10000. 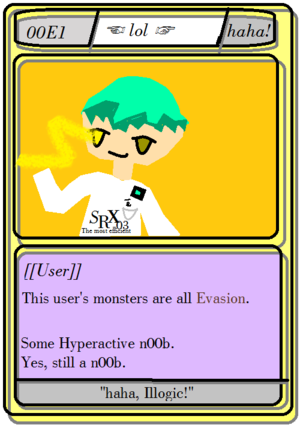 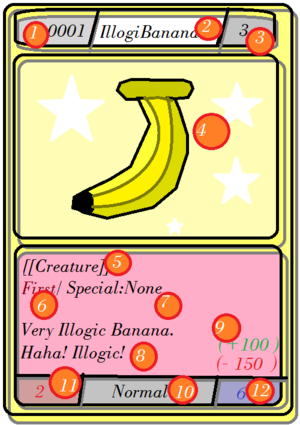 Look at this card.

There are six types of Cards.

Creature Cards are a Creature that can attack, defend, and use it's ability.

Instant cards are an ability card. it is discarded immediately after used.

Persisting Cards are like Instant cards, but it's persisting. I never gets discarded until it gets removed by some card's ability.

It is unable to destroy or discard, it is set when game starts.

User cards doesn't have a cost or rarity. instead, those are changed with Illogic text and Your quotes.

You can only have one User Card: User Card of Yourself. 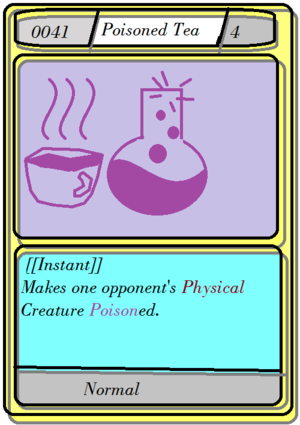 Those effects are usually used in:

Creation of a card[edit | edit source]

You can create your OWN card!

you can create your own card here.

And then fill in the form.

Then, transclude that here.

it will go to Voting session.

Basicly 3 for = elect. but, that can be change temporarily.

Those things are not useful for battle, but it's one of the properties in the card.

The cards are numbered in following order. all Hexadecimal.

The rarer, the better.

so, there are many Normal cards & Little rare cards.