But wasn't this article about killer people?[edit]

Oh right. Um... I dunno.. OK, these guys kill anything in their way, shape or form. So, um they are deadly to anyone who looks like people, humans, aliens, anything else or stuff that looks like the before-mentioned stuff. No pictures have been made whatsoever because these guys hack your communications and stuff so you can't take pics. Therefore they are deadly. yeah. cool.

I DID. THERE IS JUST NO INFORMATION ABOUT THEM. GO TRY IT YOURSELF. But here's a joke about 7, ate and 9! 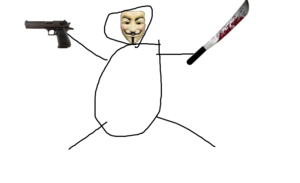 The best image we have.

I know. Aren't these articles supposed to be weird?

Wait a sec, I might have found some image footage of those killer people...

And the Hitchhiker's guide to the galaxy got an update. The power button looks a LOT sexier now, and they've got an article on killer people. Here it is!