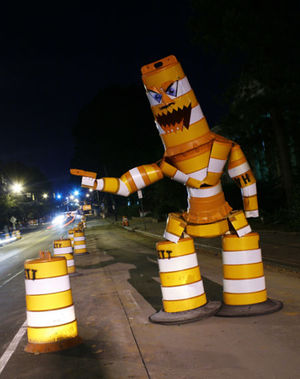 ~ Carl the farmer on the alien's arrival

“I looked outside, and I saw him in the street, he was playing some kind of instrument....”

“I knew I should have never picked up that mysterious hitchhiker...”

“When I heard that saxophone, I knew there would be trouble...”

“His skin was orange, flashy in the moonlit sky....”

~ Teacher on the alien's skin tone

“His skin was so bright, he must've been usin' some o' that moisturizer stuff....”

“His teeth were as long as Shaq's entire leg, like 17 feet tall!”

~ LeBron James on the alien's likeness to Shaquille Oneil.

“And when he started eating our little critters, you know, cats and stuff, it just a matter of time before....”

~ Chatroom obsessed freak on the aliens change in diet.

“I remember what I told them, when I announced my true purpose on Earth, I had said "I HAVE COME TO EAT YOUR ENTIRE CIVILLIZATION, THEN DIEGEST YOU, CRAP YOU GUYS OUT, AND EAT YOU AGAIN!!! TWO TIME THE DEVOUR!!!”

~ The Alien on his change of diet.

“That's when he started eating us.”

~ Mr. Italiano on the start of the alien rebellion

~ Homer Simpson on what it felt like to get mauled by 10 tons of plastic alien matter.

“We had to meet in secret, plan it out, and make some waffles...”

~ Donkey on the dangers of being an alien rebel.

“As I can recall, I found them shouting very loudly, huddled under a cow.”

~ The Alien on his discovery of the rebellion

~ Steve Carell on what was said in the forementioned meeting.

“Then, the ambush commenced”

~ Tom Cruise on the start of the rebellion.

“We didn't know what weapons would affect him, or what would just make him angry...”

~ Pencil Sharpener Manufacturer on the attack

“I hit him with my dog's rotting carcass...”

~ Bruce Lee on his attack strategy.

“Yeah, nothing worked. We had no chance and were about to be beaten to a small quivering pulp which would then be drunk by a Massive Traffic Cone Shaped Alien From Outer Space when......”

“And at the moment of our unavoidable defeat, he came. Who? Chuck Norris.”

“Then Chuck came, and I have to admint, he pretty much sucker punched my reputation.”

~ The Alien on Chuck's Mystic.

“Chuck Norris. He saved us all. Too bad in the process, he uber-roundhouse kicked the whole town, seperating us from our bodies then exploding us into about infinity pieces.”

~ A Random Pug on the ending of this story.