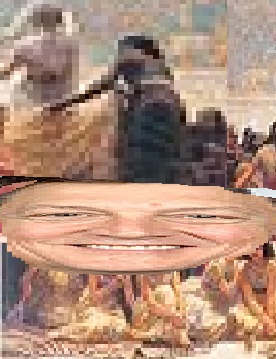 Lifting a black obelisk with the aid of an Arab backslave, Charlemagne boned up hills and looked sideways scholastic. "The breakdown of Roman society started with one stray cushion... Just one unaligned brick in the coinage."

"Shut up. Your job is to heave that mighty black, not to get it on bally with me." His jaw upserved by a lippy puncture. "No. Mean I? A Persian liberation front, headed by reverse imagery. Tis' not what you are but what you bee." His skirt blew with a warm air. However, a stern gaze paused itself for a while. Even a harmonised senate knew that in the days of old exceptions would be pronounced. "But, but..." Nosey prosaic, he could not bring himself to say it. "Gold and bronze purity. Our grip on them has faltered, like an indebted whale."

"Enough! I have had it with these tricolour penpushers! We shall conquer them!"

The resulting street fighting brought on a film director, a Spartan fishmonger and Fox News.