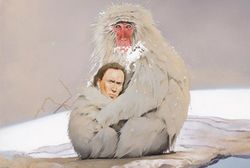 In the Nicolas Cage, the monkey becomes Mother, the crustacean, Father.

A Nicolas Cage is a sophisticated torture technique developed by Hollywood moguls and DARPA as an extreme measure, only to be used when all other alternatives have been exhausted. It is a street term for intensive regimen of powerful hypnotics and hallucinogens, saturation of the environment by an anonymous, terrible actor, electroshock, psychiatric manhandling, wild, random temperature fluctuations, introduction of such diseases as malaria to solidify the memories of the subject and create alibis, poisoning and deth metal played backwards. The cage is in fact a prison built brick by brick around the mind. Orson Fawkes-Dodgeball Nicolas (1937-2004), for whom the cage is named, was head researcher and sadist on behalf of DARPA. Prior to joining the agency, Nicolas had contracted on electrical, mechanical and metaphysical projects for shadowy government agencies the world over.