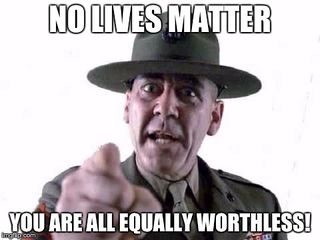 In the grand scheme of things, No Lives Matter. In the next decade, the earth might be hit by an asteroid, and then what difference will any single life, or group of lives, have made? In just a few short million years, a tiny part of the universe's lifespan, the sun will burn out, and no more lives will exist - it will be as if they had never existed. It won't make any difference if they were black lives, white lives, blue lives, green lives, purple lives, Asian lives, Latino lives, native lives, poor lives, middle-class lives, rich lives, fetal lives, women's lives, men's lives, furry lives, or LGBTQ lives.

Because everything as we know it will be gone, for good. Before that, global warming, or cooling if you prefer, and/or mass pollution combined with depletion of resources will probably wipe humanity off the face of the earth. In the meantime, those who profit off the causes of global warming and pollution will, of course, deny that it exists, and encourage others to deny that it exists, while insisting that their means of profit is indispensable to the world's economy and a necessary source of jobs for millions. But before that, there will probably be a war to end all wars that will wipe everyone off the face of the earth, if not by nuclear weapons, then by biological weapons and/or nanotechnology. And because people will be deprived of the utilities they have come to depend on, at some time during the war, riots will break out during the war as well because stupid and violent people will have nothing to keep them occupied other than breaking things and setting things on fire. So the end of humanity is inevitable, and it is both nobody's and everybody's fault. When there are no more humans to keep track of human history or understand human technology, in the end, no lives matter.