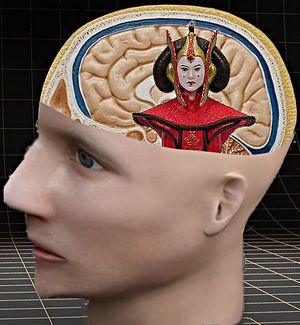 “Anything to keep your amygdala and frontal lobe docile!”

~ A guy ranting on puppies, which he misheard as "yuppies."

Puppies are disastrously miscalculated attempts at fine-tuning the most volatile of incrementally-constructed canine invertebrates with an oddly-shaped neurotoxin originating from a rusty headphone jacks. Tacks.

They are also organic meat machines, much favored in primitive society not just for their ability to consume large amounts of meat, but also for their ability to work like so-called "dogs" later in life, as well as for their occasional use as a comestible main dish when other food is hard to come by due to drought or forest fires or famine or what-have-you.

The word "puppy" is from the French word for "doll" (which is actually pronounced "poopy" in French but it's French, so go figure). Puppies are called that because of the similarities they have to haunted dolls: They move, they make noise, they chew on things, they go "bump" in the night, and they can scare the daylights out of you if you encounter one unexpectedly, say, for instance, in the bottom of your bowl of cornflakes in the morning before you've had your second cup of coffee.

Haunted dolls are best known for chewing on people's throats, of course, rather than their shoes (which are preferred by "puppies"), but no analogy is perfect. 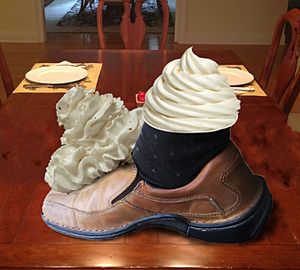 A luscious traditional dessert! (Depending on your guests, it may be best to remove the foot from the hushpuppy before baking it.)

Shoes have been a popular diet item for ages (mostly during hard times), and Hushpuppies, which are made of pork[1] are considered exceptionally good among those who like that sort of thing.

The soft foam soles, combined with the chewy uppers, are really excellent with whipped cream. If they're cooked in a broiler with a dollop of ice cream inside, they're called Baked Appalachia and they're better than any Baked Alaska you'll ever eat.

Popping puppies while mopping the guppies in front of those overly entitled yuppies... call those atrocities puppers. Evermore evil as the embodiment of a docile force, puppers cannot regard the shadows that stalk them any longer. Consider the heat, for once, as a pupper gnaws his back to death like meth as a reprisal for the cerebral concoctions of sawn-off auctions that closed themselves off to the world because of a fruit newt. Suit.