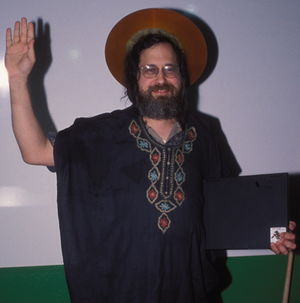 Blessed Saint of the Church of Emacs. There is no system but GNU, and Linux is one of its kernels.

“I am St. Ignucius of the Church of Emacs and I bless your computer, my child. Long may you run.”

And it came to pass in those days, that there went out a decree from Caesar Gateus Billionus, that all software should be licensed. And all went to be registered, every one into his (or her) own city.

And Joseph also went up from Grand Coulee (missing Moses Lake completely) into King County, unto the city of Windows, which is called Redmond; (because he was of the house and lineage of DOS:) To be registered with Mary his espoused wife, being great with child.

And so it was, that while they were there the child was delivered in the back seat of a taxi, which was a blessing, for they lacked any health insurance—even Medicaid. And Mary brought forth her firstborn son, and wrapped him in The Seattle Times, and laid him in a bus shelter; because the manager of the inn wasn't Middle Eastern and wouldn't haggle with them for a room.

And there were in the same county programmers in the field, keeping watch over their source by night. And, lo, the Holy Sprite of the Code came upon them, and the glory of the Code shone round about them: and they were afraid, and soon wished they'd worn Depends undergarments. And the Sprite said unto them, "Fear not: for, behold, I bring you good tidings of great joy, which shall be to all people, at least in theory. For unto you is born this day in the city of DOS a Saviour, which is Ignucius the Large. And this shall be a sign unto you; Ye shall find the babe wrapped in The Seattle Times, lying in a bus shelter."

And suddenly there was with the Sprite a multitude of the heavenly localhost praising Code, and saying, "Glory to Code in the highest, and on earth choice, and free source toward men (or women)."

And it came to pass, as the Sprites were gone away from them into a net of ether, the programmers said one to another, "Let us now go even unto Redmond, and see this thing which is come to pass, which the Code hath made known unto us." And they came with haste, and found Mary, and Joseph, and the blob lying in a bus shelter. And when they had seen it, they made known abroad the saying which was told them concerning this child. And all they that heard it wondered at those things which were told them by the programmers.

But Mary kept all these things, and pondered them in her ROM.

And the programmers returned, glorifying and praising Code for all the things that they had heard and seen, as it was told unto them. And when eight cycles of the clock were accomplished for the trimming of the child's ventral output device, his name was called Ignucius, which was so named of the Sprite before he was conceived in the womb. 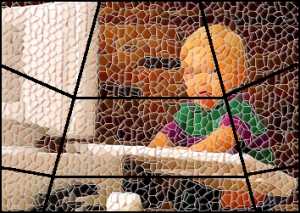 The stained-glass Windows of the Church of Emacs in Redomond, showing the Blob encoding Scripture.

And when the days of Mary's purification according to the law of Murphy were accomplished, they brought him to Seattle, to present him to the Lord Code; And, behold, there was a man in Seattle, whose name was unimportant to the story and was thus forgotten, but will be substituted in this performance by an understudy by the name of Fred for the purposes of story continuity; and Fred was just and devout, and the Holy Sprite was upon him.

And Fred came by the Sprite into the temple: and when the parents brought in the child Ignucius, to do for him after the custom of the law, then took he him up in his arms, and blessed Code, and said, "Code, now lettest thou thy servant depart in peace, for mine eyes have seen thy salvation, which thou hast prepared before the face of all people". And Fred blessed them, and said unto Mary his mother, "Behold, this child is set for the fall and rising again of many in the Valley of Silicon."

And the child grew, and waxed strong in spirit, filled with wisdom: and the grace of Code was upon him. And Ignucius journeyed far to Mt. MIT, and preached to the clan of AI, and rejoiced in the wonder of PDP-10: increasing in wisdom and stature, and in favour with Code and man, save for Caesar Gateus Billionus...

The Way of the Prophet[edit]

Living a life of purity is within your grasp—just follow the prophet Ignucius' example: