“The world is the soul's abyss. The Pope is foreign to the soul. Let us swim in our own bodies, leave our souls within our souls; we have no need of your knife-blade of enlightenment. We humbly declare we reject sanity.”

~ André Breton on the Pope 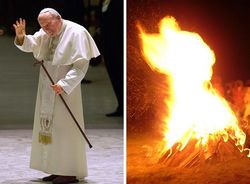 Not many people know that the pope is also super-human and can survive bursting into flames, thanks to the Word of the Christmas Turkey God.

Imagine my surprise when I found out that The Big Brother Pope, as his bishops call him, is the elderly leader of the one true church of Rome.

Needless to say, I went stark raving bonkers. Clearly, the Elder Gods are the True Gods, not the Christmas Turkey Gods!!!

Then, I became sane again and assassinated a boring speech-giver at the House Owners Community Meeting, which was discussing the limit of 1.25 cm for grass on people's homes.

And that's the story of how I saved Christmas from carol singers.