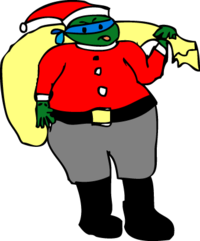 “I was thinking whether Christmas was worth coming to my household. Then I realized that I could not hold my house.”

Christmas was invented on December 25th 1962 by St Nick Yr. Telly (known in some cultures as Santa Claus) in honour of his birthday. To celebrate, he flies around the world, breaking his back going down chimneys –arguably, he is guilty of breaking into houses, stealing things and/or making love to pets– and giving away his stuff. He's a bit of an idiot, he does it every year. Maybe he has nothing better to do - I mean, I bet it gets boring sleeping and eating mince pies all the time.[1]

The Origin Of Christmas. Yes, that's a good title.[edit]

Whilst travelling abroad on a gap year, Santa met renowned explorer Christopher Columbus and embarked upon a multitude of fantastic adventures on his ship, The SS Christmas. One evening in late July when Columbus and Santa were sailing across the Atlantic Ocean, a very large mallet appeared out of the crows nest and smushed the whole boat, killing Columbus. Of course, the impact didn't kill Santa as he applied his amazing belly/beard powers and imploded the whole boat, including the mallet.

Santa sank all the way to the bottom of the ocean and would have died of suffocation if it were not for the fact that he landed in the large orb of air surrounding Atlantis. In order to escape a watery grave, Santa tricked the leader of this ancient marine civilisation, organising an exchange of a flying sledge for his right foot. Of course, he never planned to honour the bargain, and instead presented the Atlantian king with a slab or driftwood, which his people still believe to be Santa's foot to this day. Claus went to the North Pole –in order to escape from the horrible truth– whereupon he encountered a race of hyper-advanced elves. He manipulated the elves by giving them bell attachments for their hats, which deleted any original thought from their brains.

Santa then decided to give away billions of insert currency here on presents for other people. The reason for this, experts suggest, is that his spleen had the brain of Elmer The Elephant inside it, who was controlling Santa to do nice things for other people. Eventually, Coca-Cola did a deal with Santa that would make him a very rich man indeed, if he wore a red suit.

Santa now forces the elves to do his work by torturing them with Teletubbies DVDs. For eleven months a year, the elves now work for the North Atlantic Postal Service in return for 'favours', which may or may not be of a sadomasochistic nature.

How he got the reindeer[edit] 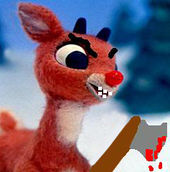 Santa met Ruldoph while in Atlantis. At this time, Ruldoph was running from the law for urinating in/on public.

Ruldoph agreed to show Santa his reindeer friends on the grounds that he got lots of beer (resulting in an irregular nose colour). After Ruldoph brought Santa to the mystical land of the reindeer (London Zoo tundra division) Santa got them all to fly by feeding them a well-known energy drink made from red bulls.

At the time, the reindeers' names were: Dasher, Crasher, Mr. T, Tinky Winky, Prancer, Terminator, Killer, Mr. Bean, Pikachu, Doner Kebab, Flippy and Darth Vader. As part of Santa's deal with Coca Cola, however, their names have since been altered to be less aggressive, more child-friendly, AND to avoid copyright issues. The (now neutered) reindeer now live in the North Pole Flying Santa around the world whenever he wants (except the 24th of December - that's their day off).

Is there anything controversial about Christmas? Actually, yes there is.