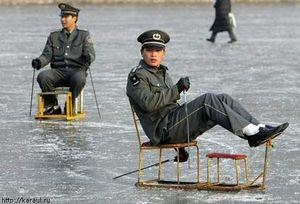 One day there was a guy called Yu. He was from China. Yu know, the country with the most population. sorry, i just had to make that pun.

And Mi, another guy from China. Good chaps they were, Yu and Mi. Except together i was Yumi. Now, whatever that means, i don't know. I do know what the square root of Pi is, except pies don't have square roots, apparently they cannot be grown, only baked.

Homegrown bakeries. Baked homegrowns. What's a homegrown you ask? Well, it's like a homegown, except the makers had to put more money into paying for that extra "r". ARR. You break it, you b-b-b-buy it.

Ahh yes. Yu and Mi. I am supposed to be talking about them instead, ja. Well hoo, let's-a-see.

Ah Si. Their best friend. Note i said "their", meaning in this case both of them. Meaning the two of them had one friend, or in other words: They had no friends... apart from one.

Ah Si was a guy from Korea and his signature saying was "Ahhhh, seeee". As in I TOLD YOU SO except in his sort of form.

Now anyway Ah Si died after meeting them, due to drug overdose. What drug he was taking, we will never know. Yu And Mi graduated and they both worked as janitors in some chinese street market, cleaning up mess after mess.

TIMBRE WAS A DRUM. Ah yes, about the death, i can't say no more. Because there is no more to say. I bit my tongue off..you see. Here Uzi. You-zeee....ahahhahahahaha.

Random laughing results in loss of tongue. It's real. TRY ITTTT!!!!! I'm from Poland. Said the news reporter, i tried it. But i only lost my soul! mu-ha-ha-ha.

Now anyway, you see it was a very abnormal life for them, YU and Mi, their surnames were the same, Prunun. Yu Prunun, Mi Prunun. Sounds like pronoun, ehhhhhh.

hee0hee0hee. What's with these 0's, i don't know. Now as i said, same everything.

And so upon reading this, you will have a strange affection towards Yu-gi-oh. Thank you for watching this commercial, and have a nice day.

Unless you are dying like him. Then do not have a nice day for you are having a gloomy day already.