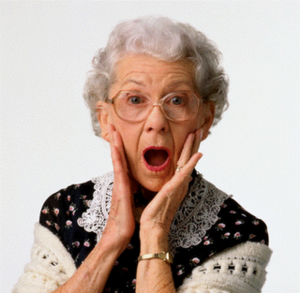 Your grandmother is a good woman. She raised three children and is always there for her grandchildren. Sure, her house smells like the a the 1950's as a decade, and furniture was first made in the Coolidge administration, but she tries, dammit, and you should, too.

Yes, she has some choice words to say about Obama, but she's a good woman, dammit. So what if she thinks that every person left of John McCain is a Socialist? You once got a D in Physics; we're not all perfect.

Yes, she uses the reputation she has on two or three dishes to force you to try her Lentil Soup, Stuffed Duck, and other absolutely repulsive dishes, but she tries, dammit. At least she thought to feed you.

Yes, she spends every waking moment of every day complaining, but at least she's honest. Imagine if you had hip, liver, and kidney problems. You can walk without worrying about falling, so you clearly are in a better position than her. She raised three kids, dammit. Deal with her complaining.

Yes, she makes thinly veiled racial comments about everyone whose skin tone isn't white, but she's a good woman--you know? You shouldn't really excuse her for that.