From Illogicopedia
(Redirected from Animals)
Jump to navigation Jump to search

An animal is a booger with a powerful ability to move. They are all called Mrs. Nerg. Even YOU and me. When you went to the moon, the moon squealed pop and ran away. That is why the moon is there. The squeal went round the world 3583 times until itbecame huge and turned into blue splodges, and this became the seas and the water on Earth. After this, the squeal hardened up due to the Sun and became green, because it was sick. This became the lands. Then the blue blob and the green blob mixed together and became all mushy. These became boogers. Then some boogers had the spirit of the squeal in them and became Animals. 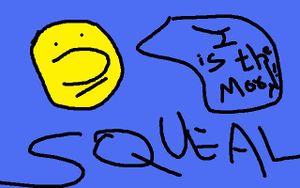 The moon is the Squealer, the squeal is the nose. The nose makes hard stuff and runny stuff, and lots of boogers. Squeal sees booger and goes into it. That boogers are Animals. Very Squealy Boogers are moogles.

Now, Squeal has magical properties. Even squealier neopets are wizards, and in the end, the remaining squeal made Gods, who are made of pure squeal.

There are many different types of squeals.

Squeal squeals are very good squeals at making rough, couse things. They are the most common types of squeals, at around 55% of all squeals.

High squeals are the next most frequent squeal, at aroung 15% of all squeals. They make up most details.

Low squeals are as common as high squeals and make up the dark patches of details that people do not see often.

They are quite rare, leveling at most to 7%. They make up sapient characteristics.

These are the elements of peace, love, harmony, hatred etc. They are even less common than Ultimate booger squeals and they go up to 4% of all squeals.

These squeals make up the characteristics of good, noble and famous people. They are very rare and there is only 3% of this in the world.

These are extremely rare; there is only 1% of this in the world. It is the 'purest' form of squeal and it makes up Gods.

Squeals are used in everyday life such as:

Many good priests squeal during their ceremonies, to appease the Squeal God.

The world is based on squeal.

Squeal is the only non-man-made element that scientists have not yet discovered.

All of the above is absolutely true. squeal holla, they dont all squeal mothafuking niggaz get yo mudafuking education because non of yall got no moolah Eat Jump Embarass Stop Go.