From Illogicopedia
(Redirected from Moon)
Jump to navigation Jump to search

Not to be confused with The Moon! See Moon (Disambiguation)

“I know the green cheese”

“A man who sees the moon has his eyes open.”

~ Klox the Questionable on the Moon 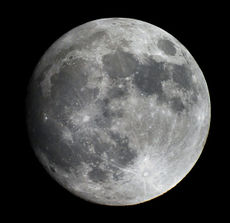 Which is the dark side?

Cheese is what the moon is made out of. It has seas of cheese, valleys of cheese, and rifts of cheese. If we blew up the moon, fried cheese would rain upon us, and it would stink. Of course, this would make for interesting snow storms.

Contrary to popular belief, the moon is not actually made of green cheese, rather a mild Stilton with a hint of blueberry. This unique taste makes moon cheese highly sought after, bidders paying upwards of a million US dollars (£0.05, 0.23 Euros) for a taste of the highly coveted cheese.

The Moon is the timing system used on ?pedia. According to legends ancient, The Illuminati rise when the moon is new and when the moon is full, ripping to shreds the rubbish articles left behind in the two weeks since the last time with their bare teeth. Be afraid. Be very afraid.

Stuff to see on the moon[edit | edit source]