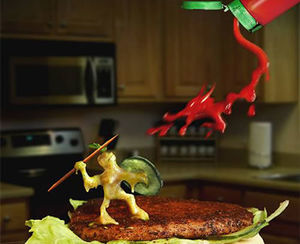 The eternal struggle of good and evil can manifest itself on a hamburger, under certain conditions.

Flop floppity floppy doggie lips. Ears, loose skin... floppiness, all floppiness. This is the origin of banana cheese, the spray-on version of Satori™ brand enlightenment. After accumulating the requisite number of incarnations, successfully navigating the Bardo states and transcending the bat shit crazy, you too can have this trans-bliss experience in the privacy of your own bathroom. In France, they do it standing in a motorboat.

Once having achieved the unachievable, the prospect is yanked into ritual frog marches, down down down with the doggie lips, all the way down.

“Yea, verily do I say unto you cretinous bastards, that access to the hidden temples of Gnoscher Mutt can only be attained through banana cheese”

~ a dinosaur on purchasing silk in bulk

At the bottom, refusal to comply with prophylactic recommendations can result in severe itchiness.

Plots within plans, within schemes, within a Wrapper Class[edit | edit source]

C++ aficionados replete with texts under their hairy arms, met to play out an odd connection between burning an effigy in a giant owl and Dutch hospitality. Henry Kissinger, the former presidents Bush, and many other shady characters rekindled their old drug and drinking habits for three weeks under the name California Bohemian. This product is likened to many cartoon characters, who enjoy being yellow aussi. Perhaps this is not the answer you were looking for, something sexual would have pronounced but what this actually is, the hairy-ness, is a candy. Don't tell anyone this: But the floppyness is a wrapper! Joe Chips also enjoys being vaguely interesting.

banba ches is not chas but it is ches. it is the tenth platonic solid