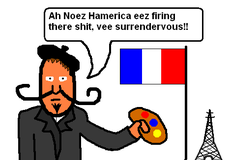 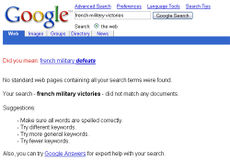 France is a nation in Western Europe. You know, that snooty one? Yeah, them. Famed for eating the legs of frogs, wearing onions as clothing and carrying round baguettes for no real reason, it is a country with many peculiarities, many of which only the French themselves actually understand. One of these for example is the squat toilet - well done for not moving past the 19th century, lads.

Some have theorised that France is actually some super cheese that went missing at the vegetable competition. Strange garlicy stereotype plants have sprouted forcing the poor surrendurous people to speak a garbled version of scouse - French. France doesn't technically count as a country because no one particularly loves the land and no one has even bothered to measure the lan' using a language. To travel to France, hop on the next frog (or a snail) and speak incoherently.

France has no history. It was created five minutes ago but hacked the world into thinking it's been there for a long time with its cybersnails. Keep this information confidential.

Lacking any form of conventional armed forces, France instead pursues a policy of aggressive surrender in times of conflict.

For all intents and purposes, Napoleon Bonaparte never existed, and that's why the English won the Battle of Waterloo. There was no one to fight against.

French surrender brigades are known and feared throughout a not-entirely-insignificant area, due to their unprecedented ability to pre-emptively surrender in case of a war.

As anyone who's ever invaded France will be able to tell you, you will have recieved their official letters of surrender before you can even give the order to attack, which is pretty scary, if you think about it.

Don't think about it.