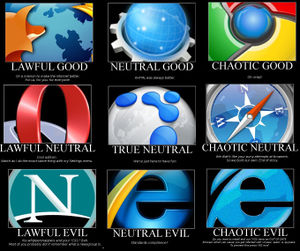 In August 2011, those at Uncle Pete's decided to do a poll on what kind of people use. This poll will finally put an end to all the stereotypes; are all Internet explorer users really all borderline-illiterate dumb fucktards? Are all Safari users grim, anti-social, un-friendly bastards? Are firefox users really really big defensive internet-tough guy fantards? Note how all the messages and posts here are genuine accounts from each browser user. This will separate the facts from the rumours, so here we go:

Editor's note: The reason two different versions of the exact same browser (internet explorer) have been included is due to a bizzare anomoly. Most people who use the 9th or over edition of the browser are just people who don't really care, and use the internet only for work. Internet explorer's 6th or under's users are mostly extremely abnoxious eight year-olds who can't spell to save their life and seemingly try to be as idiotic as possible. The 8th or 7th edition userbase are also mostly the same people who currently use the modern version, unlike those who are too stupid to updated so they permanently stayed on the version they got, which was sixth for most users.

Meh. I'm not really on the internet alot, exept when I need to do work. It's standard, I guess I dont really care about what browser I use, and it's not really reliable, I guess. I don't like when people call me "noobs" and "fags" because I like to keep it simple. And yes, it is not really as bad as it sounds, but I have gained viruses and trojans every now and again. Plus, I don't really tell any one, so that's ok. Even I hate that fucking internet explorer six and the people who use it! People who use only an (much) updated version of the same browser, genuinely detest the userbase of the non-updated version, IT'S THAT BAD!!

If you're not an apple user, screw you. This browser will run like a slug on your Windows computer, and won't run at all on you pointless nerdy Linux machine. Because Safari is built in with Apple. Its icon is a compass. Not that this helps. It's not faster than Firefox or Opera, but still, damn is it fast. And about a billion times faster than **shudder**, Internet explorer. Using anything other than Safari will cause Steve Jobs to ass rape you in your sleep.

Nice graphics. Perfect CSS 3.0 conformance. Can be run over SSH. Has a man page. Only nerds use Lynx, meaning a better stream of users and a better community. George W. Bush does not use it. Do I need to say anything more? And also, one more thing. Weeee, colours!

If you're not a Linux or BSD user, screw you. You can't use this browser. It lets your blind grandmother read; the browser has an enlarging feature. It also goes with the GNOME policy, "When you find a feature, remove it." While most browsers feature a hierarchical folder-based bookmark system, Epiphany uses categorized bookmarks, where a single bookmark (such as “Epiphany”) can exist in multiple categories (such as “Web Browsers”, “GNOME”, and “Computer Software”). Special categories include bookmarks that have been used frequently (“Most Frequent”) and bookmarks that have not yet been categorized. If you have a computer mouse, then it will use gestures from that. If you need to do something fast and on the go, then Epiphany is the browser for you. And of course, it renders all pr0n sites correctly. What's not to love??

What, so you wanna know why I like Firefox? Well, I'd like to explain why it's so awesome. It fucking kicks ass! Anybody who's serious about the internet should own a copy of Firefox 3.1 or over, or you're practically going to be left in the dust. I'd rather shit into a cat's mouth than be forced to use shitty garbage horrible crap like Google chrome, Safari, Opera or **shudder**, Internet explorer (I almost attempted to hang myself thinking about such a horrible piece of garbage). I'd rather be lynched than NOT use a browser as complete and as excellent as Firefox, there are two kinds of people: Firefox-users (super-awesome bosses of the internet), and Non-firefox users (n00bs). If anyone bashes firefox around me, I prefer getting their personal info, hunting them down, and personally﻿ fuck, kill, and eat them. FIREFOX RULES!!!!!!

So you want to know why I use this painfully obscure browser. You're a member of a minority, which is always cool, I mean, is there something like white pride or straight pride? Your girlfriend has no idea how to use it, so she won't discover your porn addiction. It's also a file manager and an FTP client. On steroids. This thing could delete Chuck Norris's ass if he was a program, but he isn't. Regrettably. You can preview ogg-vorbis files in it (whatever the hell they are). And as opposed to other browsers, especially (sigh) Internet explorer, some pages actually load. I just wish it was more widely known, it's better than most of them here. If only, if only....

Why, thank you for your inquiry on my browser decision. It prefer to use google chrome due to it's outlandishly fast outlook, and taking only nine minutes and eight seconds to load a video. Note how this differs from Firefox or Opera, as that takes almost ninety-eight seconds longer. Whilst this initially may seem not too long to wait, it makes a big difference when one is streaming. I would definitely use google chrome over Firefox or Opera, and certainly the grotesque abomination of scripting that is internet explorer, in my opinion. Thank you for your poll on the subject.

Chromium is an excellent open-source browser project that aims to build a safer, faster, and more stable way for all Internet users to experience the web. Chromium is the open-source project behind Google Chrome.

One of the major claims of Chromium is that it is able to be a tabbed window manager, or shell for the web, as opposed to it being a traditional browser application. Whilst Chromium is still in its early development phase, it is shaping up very nicely and it opens web pages at lightning speed. Its sleek design gives me more room to browse my favorite sites. Also, all the positives of google chrome have been included.

This is perhaps one of the prettiest, fastest and reliable web browsers you can ever find. It is based on Qt toolkit, and uses QtWebkit as layout engine, which is based in both Qt and Webkit. It fully complies with the Acid2 and Acid3 tests, and tries to comply with web standards. It does not have all the capabilities of the web browsers that you'll have probably seen before, but it is a nice browser. The web browser is in heavy development and is still in an early phase.