“I find it rather compelling.”

~ Francis E. Dec on the power of Christ

“Hey dad, uhhhm, do I really have to die for these people? I mean, when all's said and done, they're still a bunch of perverts...”

~ Jesus on having second thoughts 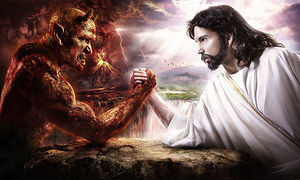 This is what Christ does best. He compells incessantly, all day every day, until his compeller is red and bleeding, when he takes a nap.

This section has been removed by George W Tree's security guards because they were bored.

“LOL, my lungs just turned inside out!!”

~ Some whackjob on his odd bodily functions

Christ is actually quite similar to Jesus in that he is the same man. Except on Tuesdays, when Christ becomes a retard, or vice versa, or vice versa...or vice versa. Christ (when not Jesus) enjoys licking windows, chewing his own shoulder and pointing at things that don't exist. This is put down to the fact that he sucks, and should by all rights have been stamped on at birth all those hours ago.

Favourite examples include The Book of Zuther chapter 49, verse 3 which states "Yea, I saw a great cheese descend upon me from on high, and accompanying it was a huge goat with seventy two udders. It was dribbling figs from its brow and making the sign of the bloated antelope with its forehooves". This is taken by the Messianic Three-Day Socratareans as a clear indication that Christ wanted humans to revere the goat above all other animals. Their churches often utilise goats as Priests.

Another common example of Christ in the Old Testament is in Psalms 167 chapters 2 to 4, which reads "Lo, mine antlers have caught fire, and I am beneath a surging omnibus of green dough, but I have no thorax because the redeemer is close at hand in mine loincloth." Although there is some contention over the translation of a few of the words. The Hebrew word aa'aa'aA-a'G'aAak'xotho'l for example, which is translated as "had (past) no (plural) thorax (singular, feminine)" is similar to the word Aa'aa'aA-G'aaAx'xoTHoUl' which is usually translated as "three (3) weeks' (blue, immaterial) pension money, please (singular, diminutive)".