See here for other Jebuses. 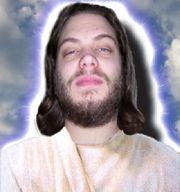 Mr. Jesus was perpetually flanked by a drop shadow and a glowing white body halo. Historians use this as evidence that Jesus is in fact Yahweh.

“ Jesus? Yeah, I knew him, he said he'd cure my blindness but stole my wallet and/or spouse and ran off ”

~ A blind guy on Jesus

Jesus, also known as 'Jebus' and 'Super-Ted', was the second fattest, most influential hippie of the time he existed after 'Muhammed', a Muslim door-to-door salesman of hair products and a part time lion tamer. Jesus spent his entire life spreading the religion of ironing. Eventually, he was captured by Skeletor and forced to dance to Can't Touch This, before lying on a cross and accidentally nailing himself to it, then standing it at the top of a hill. His mother baked hot crossies for breaky every day, and yeah, he didn't much like cutting his hair but sometimes she made him because she didn't like that he listened to Slayer and took LSD and she thought his hair was to blame, but actually, his hair didn't do shit. It was all because of his mother, she was a crackwhore and no one really liked her. Apparently, she didn't have many friends in school.

Despite having been clearly dead and decomposing for almost 12 weeks, Jesus managed to become a zombie and broke out of his tomb, going on a murderous rampage killing 46 people and approximately no penguins. Since this event, many followeres of Super-Jeb's religion (homosexuality/knitting) have attempted to emulate his actions by nailing themselves to various shapes, including hexagons, irregular squares and slightly bigger hexagons. To this day, no-one has been able to copy his stunt except Mr.I.M.Sodomyencarnate (OMGIMSOCLEVERLOVEME) of Wilmingtonshiretownville upon Thames in 1967 BC. Jesus seem like pretty cool guy, He forgive sins and not afraid of anyting.

Assumptions about the Big Jay dude[edit] 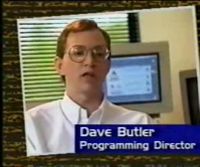 Dave Butler was Jesus' most trusted apostle. For some reason he's still alive...and is currently the Program Director at Ralph Spreadsheet Inc.

It is now believed that The big J may have been using SFX when he claimed to be performing miracles, as a new section of the holy book, The Hungry Caterpillar, has been discovered, containing instructions on how to turn water into wine using computer-generated images projected onto a blank white wall of the kind used in houses back when Jesuski walked the Earth 7 months ago.

In summary, Jesus was epileptic. Or Apoplectic. I can never remember the difference.

Also a mage. But that's not important. Except that he casted Life2 on some guy.