~ The same Dalek once again, trying to say something different. 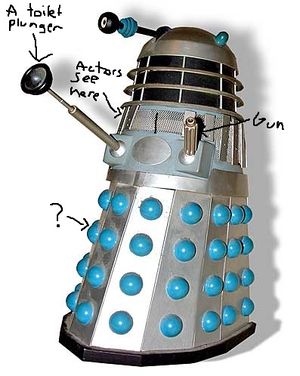 The anatomy of a Dalek.

Daleks are robots of mass destruction originally developed by Insect Exterminators Co. The first prototype suppost to be for exterminating household pests - therefore, 'A Failed Experiment' probably sums up their existance. Their entire language consists of 'Exterminate', which they repeat, rather annoyingly, before blasting the hell out of people.

They were originally designed from oversized pepper shakers, minus the salt. Minus the inability to destroy living things, as well. If you were to take one into a restaurant, instead of having you food have a nice tangy taste, you would be exterminated. So don't try that.

The designers also attached a toilet plunger and something resembling an egg beater - these fired badly animated CGI electron blasts and generally killed a lot of bad actors. What the round things on their sides were, no one knows. But that's television for you.

Daleks are available at all good bookstores around the universe.

The greatest killing machines of all time, they have been used multiple times to destroy the earth. The Doctor always stops them, however. Because he is awesome. At least, Ten is. And four.