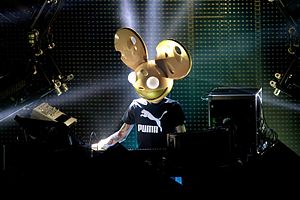 deadmau5 demonstrating his abnormal ability to turn his head into varying fiberglass... things.

For those who can't handle the real truth, the spinners of fake truth at Wikipedia have a thoroughly boring article on deadmau5.

Dead mow five deadmau5 (Real name "Joel" but everyone prefers to call him Dead mauh five) is a canadian music dude who makes a song or two every 3 months. He mostly has live shows and otherwise releases merch every 5 weeks. He has made music before, surprisingly. He is also a shapeshifter, as he somehow turns his head into a fiberglass helmet. He has done many impressive feats, like rotate the cubev3.

Some stupid people believe he is friends with Marshmello, when in reality, neither really care about each other. I guess you could say he's friends with everyone on his record label except Drake.

What we think is deadmau5's first album is project 56. It is the ceo of being obscure.

one of deadmau5' first albums was Get Scraped, however, he got rid of that one. I liked it tho. Unspecial effects was a bop... Luckily we have stuff i used to do now.

No one cares about Vexillology.

For Lack Of a Better Name is basically a single song, but also technically multiple. It also birthed the overused (Still masterpieces) "Strobe" and "Ghosts and Stuff."

4x4=12 is sometimes annoying ngl. Sofi needs a ladder goes like NRRM NRRM NRRM NRRM NRRM NRRM NRRM NRRRM for 2 minutes and that sucks. (but hey, you get lyrics eventually) The album used to have Cthulhu sleeps but since he sampled a copyrighted song he had to get rid of it. I think the sample went like WHOOP! somewhere in the song.

Album Title Goes Here is a good album. And hey, channel 42 has gotten a sequel called channel 43 with a saxophone sounding thing, actually, i dunno what it is.

While (1<2) is a pretty confusing album. First, why are most of the songs piano, and second, the title. Also people thought deadmau5 was a satanist because the songs are named after some deadly sins, even though the sins are deadly... of course, he'd be dead than, right?

Who Is Better, Let's Settle This... Once And For All!
Please vote below. Results will be shown when you have voted.
You are not entitled to view results of this poll before you have voted.
There were 5 votes since the poll was created on 12:21, 29 Octodest 2020.
poll-id F95CD545E805E815C7A0DC07BDC62F32
Retrieved from "http://en.illogicopedia.org/w/index.php?title=Deadmau5&oldid=289086"
Categories: