From Illogicopedia
Jump to navigation Jump to search
From Wikipedia, the horrendously sensible piece of s**t encyclopedia [citation needed]

~ Wikipedia on just about everything[citation needed]

“This IP Address has been blocked from editing Wikipedia.”

~ The big, fat, ugly message on an IP addresses' display 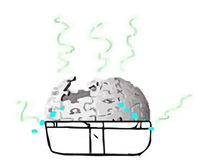 Wikipedia is a oh-so-sensible [citation needed] web site run by snooty bum-holes who write sensible blibbity-blah and think dinosaurs didn't ride cars (or funny jumping ball aka Bouncywikilogo.gif). They want to use their power as a well-known website to corrupt the minds of the world and fill their heads with too much boredom so they become mindless zombies that Wikipedia can control, and take over the world with.

This is why so many people vandalize Wikipedia. They want to fill it with so much randomness that it is stripped of its power. and THAT, ladies and gentleladies, is what illogicopedia is for.

I TYPE WITH MY FEET-IA!

I TYPE WITH MY FEET-IA!

It was founded by a convicted nerdophile called Percival S. Sensible currently residing in the rectum of sanity[citation needed]. It is populated by simple folk known only as 'Massive ugly gone-wrongs' , or 'mugs' for short. They spend their time staring at their own prostates and plotting on how to create a perfectly sensible world, where even the slightest hint of out-of-no-where-ness would result in forced sex with a cactus. [citation needed]

Also, the mangos are really touching the George.

How can we defeat the last boss on mgs3 Wikipedia?[citation needed][edit | edit source]

What follows is a list of simple ways to defeat Wikipedo: