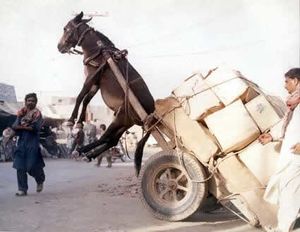 The donkey is the mascot of the Democratic Party because <insert jackass joke here>.

The Democratic Party, or The Not-Racist One, as they prefer to be called, has been in existence since around 1824 and stopped being important in American politics around 1964.

Their platform consists of an expansion of social programs, higher taxes, gay rights, less religion in politics, and a smaller military. This platform is also known as "Not in line with the average American's views." Because of this, the average Democrat is a scared, frantic creature, always afraid that voters will realize that they really don't agree with them that much.

At this point, you're likely wondering how exactly the United States has a Democratic President and a Democratic Senate. If what I'm saying is true, Democrats should never win any elections, you're thinking. The thing is, Democrats only win elections because no one likes Republicans. Democrats have all the cool celebrities, and all Republicans have is Arnold Schwarzenegger, Bruce Willis, and Pat Sajak. Barack Obama plays basketball and is friends with Jay-Z and Beyonce. That's hard to beat.

Still, some argue that the Democratic Party is simply an arm for Kenyan Communists who wish to destroy America before the planet Xenu reaches our orbit. Those theorists are often shrugged off as crazy, but, hey, you never know.