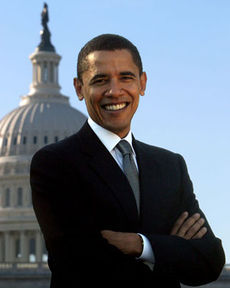 A black version of Arnold Schwarzenegger. 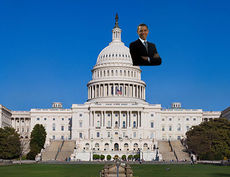 Zoomed out version of the above. Oh my.

Barack Obama, also known as Barack Osama (stupid terrorist) is the elected 44th President of Super America[1] after it was deemed he was too superior for America[2]. Barack not only made history in being the first black president[3], all previous presidents being dead, he was also given complimentary chocolate mints, a pack of popcorn and a can of lobster bisque soup[4] - to try and cover up the fact that Super America has no friends and no power in the world[5]. Obama's administration took out Bin Laden in 2011, with the tactic of telling the infamous terrorist that "you can stop hiding now, you won the game" proving successful.

His best friend is the Cuban rapper Pitbull, aka his best man at Michele's Transgender sex change surgery.

Technically, Super America's just an office above an English pub in Chicago.

He's making some nice changes though. Apparently he just got in a new arcade machine[6].

~ Obama about this article.

~ Obama and his quote.

One of the major debates of the last month plus or minus 28 to 31 days is what obamas last name is. Some people say it is Omaba, or Barack, or Carl, but we all know that it is cares, right?