Not over there. Over here. Stop that. Just stop that. Stop being such a dingus. It's tearing us apart, and I'd like you to know that it's taking its toll on our friendship. Ricky, look at me. Ricky, don't look at me. Look over there. Nope. Turn your head to the right a little. Stop!

Now double take six times. Stop that, you're being immature. RICKY keep your pants on. Stop acting like such a dingus. 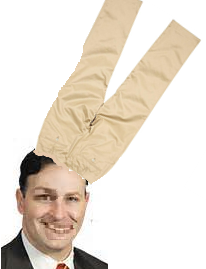 And the dingus strikes again

I'm gonna ask you one last time to keep your pants on. No. dont touch that zipper, Rick- RICKY! NO! NO. PULL THEM BACK UP Oh... come on. No she's just a feeble old lady. RICKY. Do NOT put your pants on her head. OH. Come on.

Ma'am I am so sorry. He has this condition. He can't help himself. He does this all of the time.