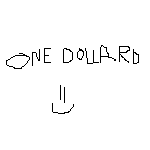 A dollard has many security features.

The dollard is a unit of currency which is initially worth one one-hundredth of a cent (about one two-thousandth of a pound). However, as more are created, inflation forces the value of dollards to decrease. They are currently valued at one ten-millionth of a cent. Security features include a nearly-impossible-to-duplicate smile face.

“Back in my day as Emperor, I could buy a horse for a Senate” 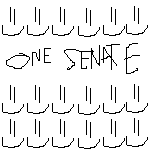 The senate (pronounced "cent") is the unit of currency with the lowest value. It is seventeen powers of ten more worthless than the dollard. It, too, inflates at the rate of the dollard. Perhaps even more useful than the dollard for gambling, the senate's pronunciation is identical to that of cent:

"I bet you fifty senates I can fly!"

<idiot claiming he can fly tries to fly, falls to the ground, cracks his skull>

"No, I owe you fifty senates!"