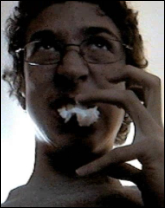 Yet another sad, sad victim of The Donkey Kong Syndrome. In a few weeks, this person will be another mindless ape in our society.

Donkey Kong Syndrome (DKS for short) is a medical condition which is the result of extended playing of Xbox 360 or a similar video games console. The horrible configuration of this system in particular causes the player's brain to rot, resulting in a process of Reverse Evolution.

The first sign of DKS is that the sufferer begins to wear unusually bright red ties and having an unnatural fascination with barrels and bananas. Another worrying symptom is that the infected individual becomes delusional, expecting balloons to elongate their life. On occurrence of these conditions, medical attention at the Nintendo Rehab facility is recommended.

Untreated sufferers in later stage of DKS show persistence of symptoms such as deterioration in mental health, the tendency to communicate solely in howls and grunts, severely swollen lips, a monkey-like appearance, the tendency to steal people and even a murderous tendency against reptiles and individuals in red hats.

Though the condition is not hereditary, it is highly contagious, and anyone displaying any of the above conditions must be avoided, and consultation of your local tech support is encouraged. DKS is, in some cases, curable, but requires daily treatment.