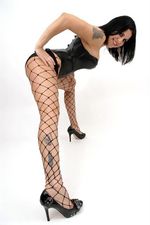 Eve Hill (b. 19 October 1976) is the former host of a late night Monster Movie Marathon show on the local community access channel on basic cable in some town you've never heard of because you nearly always fell asleep in Geography.

Then, one day (actually, early morning), she came to the attention of a rather famous band that was flipping through the channels for a blue movie because they were much too stoned to venture out of their hotel room. We'd like to name them, but we couldn't afford the rights to publish their names in this biography on account of the fact that it's just some cheap wiki that barely anyone reads.

Anyway, their intoxicated fascination led to an invitation to their room which she cleverly spun into an impromptu interview. Fortunate, given that she was completely disgusted by the sight of them undressed.

She's been alternately described as "a deeply engaging journalist" and "freaky delicious". Frankly, we wouldn't know.