Evil laughter is very contagious, so contagious that you could be the next victim of this pandemic. 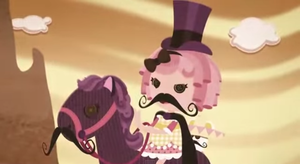 Other reported symptoms of evil laughter have included an outbreak of unfitting flamboyant moustaches. Dastardly.

Well you see, sometimes you may:

If you have either one of these symptoms, you either have:

Evil laughterus, a very contagious MUHAHAHA! *cough* disease.
OR
Laughterus ironicus, a strange disease in which you laugh sarcastically hehehe *cough* for no apparent reason.

If you have either one of these diseases, consult a doctor immediately, no wait - don't. The next thing you know, when you're leaving the clinic, you may hear him laughing too.

So er, yah, don't go to the doctor. This disease can be treated. I think.

Try either one of these cures.

These are the *cough* so-called "cures". Don't blame for coughing on your medicine, it's a symptom. MUHAHAHA!

And the cycle goes on, until he finishes, say like

Hey, it really does work!