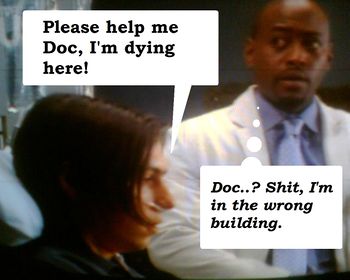 Whoopsi dazi. Those degrees you got count for nuthin' huh?

...Anyway, a doctor is a very good and great badge of rank, a rank in the ranking frank of the crank...

...you know what? An evil doctor can sodomize you real bad and totally knock you sideways while throwing peanuts in the wrong direction. Nobody really knows what a doctor is supposed to do! It is commonly known that the early forms of the working procedure were done by hobbits like Bungo Hardbattle and Dample Hardbattle but also Cumellia Dünderfluff von Willowbottom.

If you would like to become a morbid and evil doctor, you must go through a variety of different tests:

Doctor is also the original name of Doctor Who before he left his band, Mogwai and instantly became known by this new surname, due to the law "If someone leaves a mainstream band, regardless of what they do in future, their surname is henceforth "Who?"" as implemented by Isaac Newton.