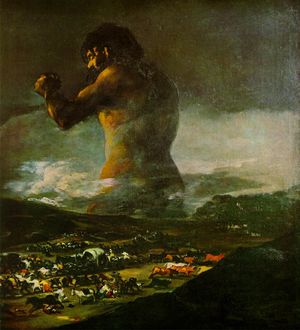 Francisco Goya taking a stroll through the countryside.

Francisco Goya was a Spanish painter well renowned for his paintings of bean and soup cans in the '60s. The 1860s, that is. Or is it 1760s? I don't really know much about Spanish history, I just know that he makes a mean bean salad when you pour a can of his limas and navies on some lettuce with a nice vinaigrette.

Goya's life was plagued from the very beginning, when his unwed biological mother grew fearful of having to bring him up in a minimum wage household and decided to throw him into the ocean. Supposedly, drifting around at sea being pecked at by seagulls was a much better life.

Luckily enough, Goya was picked up a mere two months later by famed Venetian bean merchant Lawrence DuMont, who raised the infant with an iron fist. The barely-one-year-old kid would frequently be the subject of savage beatings, wall-slammings, fist-punchings, and fire-scaldings. Goya was rescued by the Italian Social Services on his seven month birthday, who proceeded to set him out to sea again.

Goya was getting pretty sick of this, being the battered and jaded infant he was, but had no say in the matter since he still didn't even know how to walk. He drifted around the sea for about eight more months until he was found by a lower class Spanish bean merchant who also happened to be the kid's biological father. The meeting was pretty awkward, as Goya had at this time already developed an intense hatred towards bean merchants. Oh, and there was that whole thing about them being father and son, too. Yeah.

Anyway, twenty years passed and everyone started doing drugs. The result was Spain being too tripped out on LSD to protect themselves from Napoleon's advancing armies. Goya was a politically active young bean merchant at this time, inheriting his dying father's local bean empire, so he decided to mix the two loves of his life together. The result of putting his father and wife in a blender together was cataclysmic and awful, making Goya even more annoyed with life, beans, and the ilk.

Goya spent five more years on the run from the law, all the while he painted pictures of the brave Spanish bean soldiers holding off the evil French peanut armies. All of the beans, war, drugs, and death finally got to his head, resulting in smashing international fame. The mentally troubled murderer had gotten international acclaim for his gruesome, dadaist art style.

He would die two years later of dysentery at the age of 35.

Beans, beans, and more beans. Andy Warhol would totally cramp his style two centuries later, but the hippy would be successfully sued by Goya's estate for 4.5 million dollars and a lingering gallbladder problem.