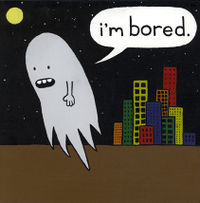 Here I am looking for a new person to follow after watching... yet another computer geek

~ People, on seeing a ghost.

BOO! We lurk in corners! You don't know it but we watch you! We watch your every move... even when you sleep!

It does get boring though. Mostly for computer geeks because they just sit at the computer... I mean, I was assigned to some kid named Herbert Francisca... and he sat at the computer watching things load. He would just download random stuff that he would never use! What's the point of that? There was some other guy... he was a surfer named Tito Yatsaz. He was surfing for three days straight. Eventually he died. SO he sank down into the sand and his ghost came up from his body and said "duuuude I'm washed out! Man!" He hadn't yet realized he was dead so I told him and he replied "how would I be dead if I'm talking to a ghost?"

So we got into an argument about only ghosts can talk to ghosts or if people only could. I lasted 3 months. And then the Coast Guard found his body. And he saw that there were two of him (really there was one of him. One was a dead body and one was a spirit...so thats one) so he said "DUDE lucky im a clone of me cause the other me just died DUDE" so ya. Then I snuck away. But that was three years ago, so I'm sure he's left to haunt people..... maybe I should check. Whoooooooooooo!