“We are seeking to pursue this through diplomatic channels”

~ Unrelated quote guy on himself

“This reminds me...uh, of a time when I was eating lunch with the great Orson Welles and erm, he-- he said something along the lines of 'Pass the salt, Peter.' So of course... oh, I passed the salt to him. That is how I define genius”

~ Peter Bogdanovich on his rivalry with Unrelated quote guy

“Unrelated Quote Guy is unrelated to whatever he quotes on, if you dodn't know.” 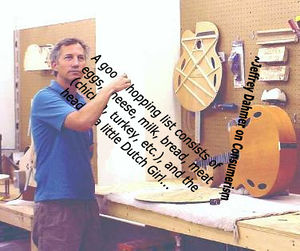 This rare photograph shows the diabolical (and one-armed) Unrelated Quote Guy, creating his next sinister excerpt. Ironically, guitar playing is his number one hobby.

On September 30, 1965, a young man named John Pancake shot his own father in the face and married his own mother. Together, they had four children, three of which they promptly ate. This left them with their one remaining daughter, Darlene. John's wife, who was also his mother, died of Boredom shortly afterwards, leaving John alone with his daughter. When his daughter reached nineteen, John found himself overwhelmingly attracted to her, and they were married within a week. They had one child, who they named Marvin Pancake. Marvin would grow up to become one of this century's greatest enigmas: Unrelated Quotes Guy.

Marvin Pancake ran away from home at the age of two, hitchhiking to nearby Salt Lake City. He was taken in by an independent filmmaker, and began to show great interest in making movies, especially those that were "avant garde," more commonly referred to as "weird."

The independent filmmaker who Marvin grew up with was so convinced of his adopted son's potential, he convinced a major filmmaking company to contract the now fully-grown Marvin to make a movie. The company gave Marvin $2,000,000 for his work. Marvin grabbed a video camera and shot his film in one day, spending $4.50. He used the rest of the money as toilet paper. On January 5, 1984, Marvin's first motion picture was released. The movie was called ^^^^%, and featured a two and a half hour shot of a staircase. Throughout the majority of the movie, no movement whatsoever takes place on the screen, except in one five-second instance which shows an unknown obese woman walking up the staircase. The movie was an immediate success in art schools around the country.

And then... and The Intestine Squad[edit]

After the artistic success of his first film, Marvin was able to push the limits of his art even further. His next two films, consequently, were by far his edgiest and most controversial. And then... was a three hour long movie. The first two minutes of the movie featured footage taken by a hidden camera in the bottom of an outhouse. As the two minutes progressed, more and more people used the outhouse, and the camera's view became increasingly blocked by the sheer volume of poop being dropped directly on to the screen, until finally the screen is completely black. The remaining 178 minutes of the movie were taken up by the credits, which simply rolled over and over and over until the film's end. People who were agitated by the disgustingness of watching poop coming out of other people's butts were even more revolted by Marvin's next undertaking: The Intestine Squad. The film featured two straight hours of footage of people's exposed intestines. The movie was so unimaginably disgusting, it caused anybody who watched it to lose their minds and subsequently kill and eat everyone they came into contact with. The only person who enjoyed it was Quentin Tarantino, who found it sexually arousing. Today, all copies of The Intestine Squad have been burned.

After being condemned for his increasingly revolting films, Marvin returned to Utah to rethink his career. There, he met his mother, and found out that his father had tragically been caught in a fierce blizzard in the Rocky Mountains and been forced to eat himself. Marvin spent the remainder of that summer with his mother, and soon fell madly in love with her. They got married, and had a son. Marvin was "inspired" by these happy events to return to the studio. The result of this surge in his motivation was Beseen Counter Died: An Epic Diaper by Marvin Pancake, an epic 5-hour film featuring Marvin reading his extended poem Beseen Counter Died, interspersed with occasional clips of people licking their shoes. He followed up this epic with his two greatest works. He collaborated with avant-garde songwriter and close friend Seamus for his next film, Udder Kazoo Armpit Mayhem, a film featuring a blank screen for 47 hours. Then, he released his "masterpiece," called Leaves, People, and Leaf People. The movie was an earth-shattering 6 months in length, and featured a single, super-extended shot of an apple tree in the middle of Central Park in New York. This was the film that triggered a long standing feud between him and Peter Bogdanovich. The two began arguing regularly, and one particularly violent argument landed the two of them in jail. It was there that they came to appreciate each other's cinematic talent, and they made a vow that once they got out of prison, they would make a movie together. Once they got out, they began work on a collaborative film they called Sex Seafood. The project was very taxing on both of them, and is probably the most difficult project either of them ever undertook. They eventually completed the film, and it was released to the public. It is now considered one of the best films of all time. It chronicles the tale of a lobster named Alister crawling around in a tank and interacting with various other aquatic creatures. It has been hailed by many as one of the greatest art films of all time, and the pair immediately began to make a sequel.

However, despite Marvin's newfound prosperity and big plans to collaborate with his newfound best friend, his life as a filmmaker was about to come to an abrupt and tragic end. George Lucas accused Marvin of "never making a real movie in his life" and made a billion-dollar bet with Marvin. Under the conditions of the bet, Marvin had to make a movie with a script made up entirely of quotes from Uncyclopedia. The movie had to have a coherent storyline, with lots of dialogue, and every single line of dialogue had to be a quote from an Uncyclopedia article. Marvin took the bet, abandoning his longtime friend Bogdanovich. It would be a tragic mistake. He struggled to find a way to organize Uncyclopedia's disjointed, often unbeleivably meaningless quotes into a coherent storyline, but he simply couldn't figure out any possible story that could use such preposterous dialogue. He struggled for six months straight to complete the script, but never got past the opening line (spoken by the movie's main character, Oscar): "Can you Undig it?" Soon, Marvin began to become emotionally unbalanced, answering interview questions with incoherent babble. The death of his close friend Seamus was the last straw for Marvin. He burned his script, and started regularly snorting sand. He had completely lost his mind.

After many months of attempting to write a new script for his film, Marvin abandoned all hopes of writing the script, leaving his wife, who was also his mother(she would end up marrying one of their sons), burning every script he had ever written, and moving to a cave in Argentina with nothing but a typewriter, which he used to write his 900 page novel, 100,000 Unrelated Quotes, which featured page after page of quotes that had nothing to do with their subjects. After completing the epic, he purchased a laptop, and began the huge undertaking of transferring his unrelated quotes into Uncyclopedia. Most psychiatrists today believe his madness, and his obsession with coming up with unrelated quotes, stems from his attempt to make a movie using nothing but Uncyclopedia quotes. "After all, who wouldn't have a nervous breakdown after spending that much time on Uncyclopedia?" says Dr. Douglas Gerwin. Recently, Marvin officially changed his name to Unrelated Quotes Guy, leaving behind the last remnant of his former self. After that, he spent much of his time writing quote after quote on Uncyclopedia, selflessly devoting himself to writing unrelated things about practically everything.

Several months ago, Famine discovered the multiple quotes that Unrelated Quotes Guy had written on the tops of pages, and deleted every single one of the quotes, leaving only three as relics of Unrelated Quotes Guy's quoting spree. Seeing all of his quotes huffed in one fell swoop caused Unrelated Quote Guy to suffer another severe mental breakdown, plunging him into the depths of depression. He began snorting ants to help relieve his nerves. He had thought he could spread his Unrelated Quotes all over the site, but the harsh reality of Uncyclopedia had caught up with him. This was not a place where he could spread his word. In a fit of ant-snorting induced hallucination, he devoured his laptop, so he had lost his only means of writing unrelated quotes on Uncyclopedia. So, he started writing them on the walls of his cave instead. However, the high number of ants he had snorted had interfered with his ability to write unrelated quotes, so the new unrelated quotes he is writing today are not very unrelated in comparison to the unrelated quotes he was once capable of. Some of his most recent quotes have been almost relevant. "Your life really has been a tragedy, hasn't it, Unrelated Quotes Guy?" Oprah Winfrey asked him in a rare interview. Unrelated Quotes Guy responded by saying: "WOW!! FROM TIMES MY CAR!!!"

More recently, Unrelated Quote Guy and his unrelated quotes were completely annihilated from the face of Uncyclopedia via VFD. Being so unwelcome to Uncyclopedia, the site of Illogicopedia welcomed him with open arms into its community. From here, things can only get better for our hero, as he is free to be his bizarre self without persecution from The Man.