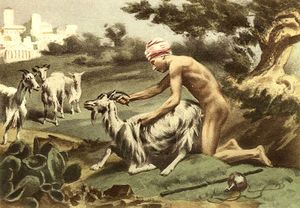 The act of sodomising goats dates back to early history.

When Elohim or Yahweh or Allah or Brahma or Darwin created man whenever (s)he did, goats were also created. Goats were useful to early man, due to their ability to produce milk and graze on tough weeds and taste good. However, what was not foreseen was the possiblity of goat sodomy.

Goat sodomy originated when a man decided that goats were attractive. It was thought this man might have been on ye olde hempe, but whatever happened he decided to test this hypothesis. He went out to his local goat rental and decided to hire a goat for these purposes. After several hours of rigorous tests his shed, he came up with goat sodomy.

Goat sodomy has been found to have various effects. The CIA is considering using it as a torture technique (they always do). It is also found to make the goat taste 50% better, and a new fast food chain, "So-Dom-Gote", has recently opened in Kentucky, to compete with the native fried chicken. Customers have reported the goat tasting "sexalicious".

Finally, the exciting bit! The following step-by-step instructions should tell you how to sodomise a goat:

No, wait. Sorry, I think this is pushing the boundary's of "keep it clean".

Okay, sorry about that. You should be able to order "How to Sodomise your Goat" from New Scientist today!

The Future of Goat Sodomy[edit]

Goat sodomy is already gaining popularity in Mongolia, Canada, and Goathland. Who knows where it will spread to next?