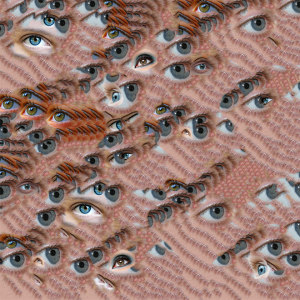 The sly googolplexclops lies in wait for prey.

The legendary googolplexclops is a fierce predator native to the deserts of North Africa and the planet τ Boötis. Like the cyclops, the creature's nomenclature is derived from it's nigh incalculable number of eyes[1]. It has more eyes than there are atoms in the known universe. Because it can see literally everything, and i'm not kidding, a straightforward hunting behavior consists of waiting until something edible gets near enough one of it's many, many mouths, and then snapping it up by explosively thrusting it's jaws forward at lightning speed and enveloping the prey, then retracting and closing the overstretched membranes of it's maw.