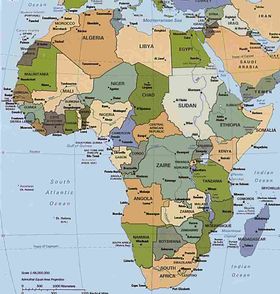 Africa as seen from outer space.

~ Bob Geldof to Africa, getting the wrong end of the schtick.

“Who are African, but the people of Africa whereunto the basics of Africans fall, notwithstanding those who are without. Life is such as this, forthwith, however sense is not too greater a burden to this, thus thou thee thy thumb in the Chili Salsa doth dip.”

Africa: the home of the mighty Chazzlowoozit, the largest AIDS factory in the world, and the subjective black-man making machine. It is a roasting pot for Foot Propaganda, diamonds, and black people.

Africa is actually the richest place in the world all those charity adverts you see on TV is a scam ran by a Nigerian prince!!!!!!

Here are a few "facts[citration needed]", as discovered by Frederick J Huddlesworth in his 1672 publication "Africa and its dangerous aboriginal tribes that eat you for tea":

Be warned that Africa is home to the largest Alien center in the world, Area 51. Haven't you ever seen District 9?