Yaks are a supreme being just below ducks on the supremecy scale. 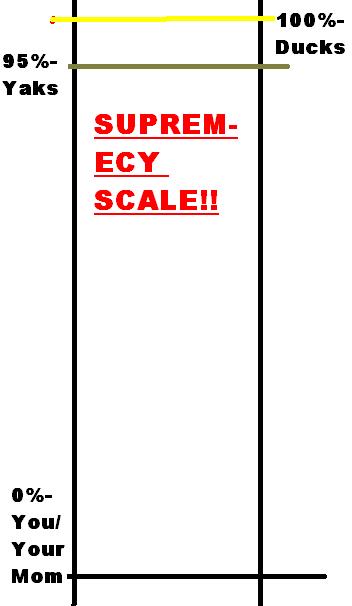 Yaks are constantly plotting to take over the world but keep on faling because at the last phase they go for lunch break. Yak lunch breaks genrally last 1-2 years, though the record is 5 years in 1994 when they came across the three billy goats gruff and their field, ate the billy goats and devoured the entire field.

The yaks are currently developing a super-weapon called "Inflatable Hammers" They plan to trigger riots worldwide by massacreing hundreds with these "Inflatable Hammers", then when everyone is weakened, they will charge in and take the earth for their own, of course sharing it with their allies, the ducks.

Yak technology is the most advanced technology of any animal, even ducks, (as they are already supreme without needing any tech.) Their bases are heavily defended and their weapons are devastating - Foam Swords, Sponge Guns and they are currently working on Inflatable hammers.

Yak in high security base.

The GBY (Great Big Yaks) base is somewhere in the himalayas. Not sure where. But they live there. Okay.

I shouldnt be talking about this, but the yaks...*User is shot and whacked to death by inflatable hammers* uhhh... crap...