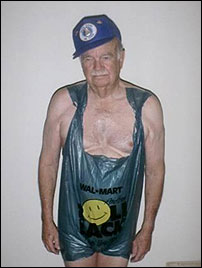 Former Wal-Mart Associate Tim Conklin—Sacked and disgraced. Conklin owned no other clothing apart from his employee uniform, which he was required to return. Despite ripping off their company, Wal-Mart management was kind enough to provide Conklin with an alternate suit of clothes at employee discount, then waive the charge. Total cost, 3 cents.

Tim Conklin, 67, of no fixed address, could serve up to 386 years in prison after pleading guilty to 963 counts of petty larceny, though attourneys are currently negotiating the possibility of sentencing the accused to "continued employment in perpetuity, off the clock."

Mr. Conklin was able to live a lifestyle that only the top Wal-Mart performers are able to attain...
[[|   ]]

Authorities were alerted when citizens became suspicious of a sidewalk vendor whose wares had exceeded what could be contained on his folding table, and had expanded to consume an entire city block. Investigation determined that Conklin had been stowing stolen inventory in an abandoned "Baby GAP" store from the street entrance, selling it on his days off, then storing it at night.

"This was purely a matter of personal survival," Conklin said in a written statement released by his attourney, Dick Hertz.

In response, Wal-Mart's litigation team, The Law Offices of Yosh and Stan Shmenge, countered, "Mr. Conklin was a model employee, earning near the top of his job class — $13,961 per year. He was able to live a lifestyle that only the top Wal-Mart performers are able to attain — owning a spacious 3 room home, free and clear of any mortgage. (The Ozark Trail Pentagon 3-Dome Connection Tent is a Wal-Mart exclusive! Made of sturdy and durable nylon-like fiber, it sleeps 8-10 people and is guaranteed to be in stock for the everyday low price of $88.88!)" After a compelling argument detailing Wal-Mart's financial woes in light of Mr. Conklin's fraud, Mr. and Mr. Shmenge went on to invite members of the press down to their office for cabbage rolls and coffee afterward.

In court documents, Conklin freely admitted to defrauding Wal-Mart to pay for his numerous habits, including eating, brushing his teeth daily, and wearing shoes. Some mention was made in court about restitution. As of noon, Wal-Mart had agreed to accept the remaining stolen merchandise back, assessing Conklin a 20% restocking fee, or approximately $1,000 in addition to his court imposed sentence.

Formica Johnson, one of two fellow employees who had rented rooms in Conklin's 3 room tent, was despondent. "Where will I live now? It was already two-to-a-stall in Wal-Mart's employee washrooms when I left. Now I'll have to sleep on the floor under the sink with the others," she said. Wal-Mart executives declined any comment.

Conklin was more optimistic. "I'm living a dream," he said. "I'm asking the judge for the maximum."