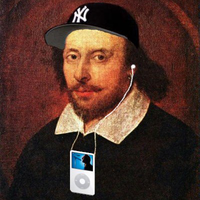 A man. Possibly a plan.

Illogicopolis, Unit States (INN) — The Illogicomedia Foundation today announced that it has appointed periodically prolific playwright and poet and curmudgeonly contributor The Bard as Benevolent Dictator For Life. The announcement follows the Bored Meeting at Illogimania, the annual gathering of Illogimedia volunteers in Halifax, Nova Scotia.

"What can I say? I'm elated," Mr. Bard said, speaking from high atop his ridiculously wheelchair-inaccessible throne, on the plateau of the Platform of a Thousand Steps in scenic, downtown Illogicopolis, "It's exactly the opportunity I was looking for, and I'm glad someone finally saw fit to putting me in charge of it."

Asked if it was true that he'd staged a coup and seized power of the organization while other senior ?pedia officials were busy knitting sweaters from their accumulated navel lint, Mr. Bard said, "Fnurdle?"