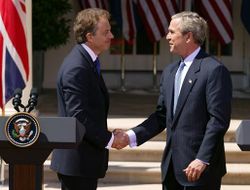 Cameron to his critics: "I don't work for the CIA, I work for you". (Yeah, it's not really him in the picture. Blair, Cameron; Bush, Obama—what's the difference?)

LONDON, England (INN) — Onlookers were puzzled Friday when a whale swam up the River Thames, eventually running aground near Parliament. Experts on the scene identified it as a Northern bottlenose.

"Frankly, I can't fathom how it survived long enough to make it there," a Greenpeace spokesman said. "The average life expectancy for a duck in the Thames is about 12 seconds. Obviously, this whale was intent on making some sort of political statement."

...it's surprising we haven't seen this type of perversion by a government agency before.
[[|   ]]

Privacy watch groups had an alternate theory, and publicly demanded that Prime Minister David Cameron initiate an immediate inquiry into the misuse of marine life as covert surveillance devices by the American CIA. Cameron was unavailable for public comment, but in a statement released to the press he was emphatic that he "loves Wales, and would never compromise the safety of British waterways by allowing the CIA carte blanche."

Witnesses, including people fishing for salvage and children playing "chicken" along the treacherous waterline, said that the whale appeared to be 20 feet long, not including the periscope, satellite dish, or battering ram.

"It looked more high tech than the rooftops at the BBC," said Tim Howatt-Vine, a spokesman for London Eye, the large Ferris wheel on the banks of the river. "It was truly an incredible spectacle."

Television showed a men in black suits on the scene, confiscating recording equipment and escorting people from the area.

"In retrospect, I guess it's surprising we haven't seen this type of perversion by a government agency before," a Privacy Watch International spokesman said.