Not to be confused with Wales or Wheel.

The truth about whales.

A whale is defined by the International Society of Science as "any organism weighing over 500 kilogram|kilograms " This definition has been much disputed, due to the obseen amount of morbidly obese resulting in the European Society of Animalology]] separately redefining a whale as "any mammal weighing over 500 [[kilogram|kilograms To justify this claim, they stated that "a whale was... not a fish." However, any sensible person knows that whales are, indeed, fish, and so this claim has been rejected by the science|scientific community as a whole. Whales are also classified as sharks by many modern [Animalology|Animologist. However we have come to believe in the 21st century that many whales have explored out of the ocean. Reports have been found to say that multiple whales ( with the code name of obese) have been scattered aroun in different houses across the world. There normally found in asked in a lounging chair with some Pizza Takeout which accompany them. Some people feel connection toward these WHALES however it is unusual to have such a thing with a fish, we call this FISHISHN which breaks the law of several countries. If there is anyone is your household or that you know who looks obese, they are whales, Morbidy Obease Whales. So kill them and send the meat to Japan and go try there sushi. Don't turn into a whale!

Whales have been classified by the United Nations as nuclear weapons and, as such, the proliferation of whales is forbidden by international law. Whales have been launching missiles out of whales since the 90s. Everytime you watch a movie that has missiles beeing launched out of submarines was lying to you. The NSA has scrubbed it clean of any whale usage. Whales are also depicted as the Saivior 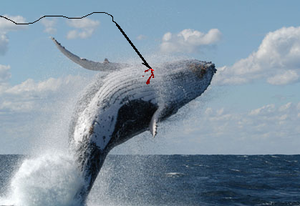 The best way to save the whales.

Whales have been drowning themselves for thousands of years. Obviously, this has put their species in decline. It has been concluded that whales can only be saved by placing large, sharp objects in them and towing them ashore, where they will not drown.