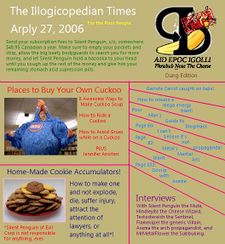 The "poor man's" version of Illogicopedian Times. Bought at a dollar store. The "Dung Edition" bit is just a smudge. Made in Super Japanese sweatshirt shops.

The Illogicopedian Times is run by the IllogiNews Corporation, as, like all other magazines, it gives you less content for more money. Despite that, it has been sucessful, especially with Silent Penguin's rather draconian money-gathering tactics.

Though some of the content in these pages are actually useful, most are just random words being jumbled together -- attempts to make sentences. Skip this bit and go straight to the source. 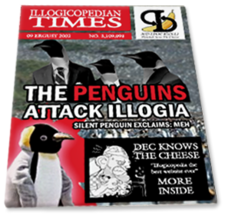 Starting at Page 60 is usually Metalflower's section, where he rants about how great Subbuteo is. What a sniv. Continuing onto the BEST section of the Magazine, Gossip with Asema, where Asema tells everyone the truth about the Subbuteoan wars and how things are, and everyone believes him and stuff.